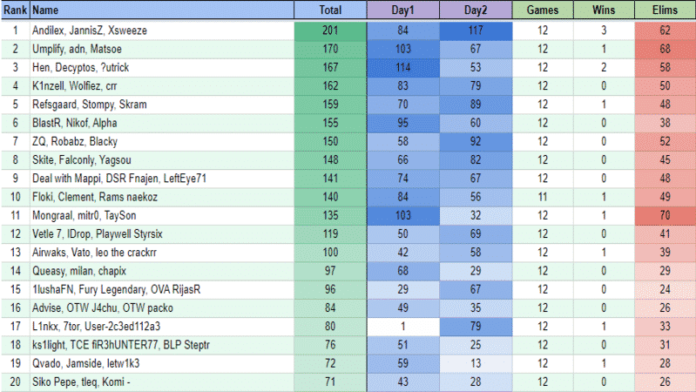 Which teams prevailed in the last FNCS Season 4 Qualifier?

Chapter 2 – Season 4 Fortnite Champion Series (FNCS) Qualifiers have officially come to an end after three weeks of pulsating action. Competitive Fortnite players worldwide compete in teams of three for a huge prize pool of 5 million US dollars, which is spread across seven regions and two platforms. So far, several trios have secured a spot in the second phase of this competition, commonly known as the prelims. All trios will be divided into different groups to qualify for the Grand Final. It's the most exciting time of this competitive season as Epic Games prepares to crown 14 regional trio winners, seven on PC and seven on console. These players will receive the Ax of Champions in-game and a $ 5 million share.

Last week's FNCS qualifier produced several consecutive winners who repeated after winning the first week ]. The top trios begin to separate from the pack. The third and final qualifying game ended tonight. It was the last opportunity for teams to qualify either by series points or by placing in the Grand Final.

Before we adjust to the second stage, let's see how each region has developed for FNCS week 3. Keep in mind that the top 8 trios from the Middle East, Oceania and Asia regions will move on to leg two – also known as prelims – at the end of the Grand Final. For the more populous areas – NA East, NA West, Brazil, and Europe – the top 15 trios will achieve the same thing. We would also like to thank Kinch Analytics for providing the leaderboards shown below. 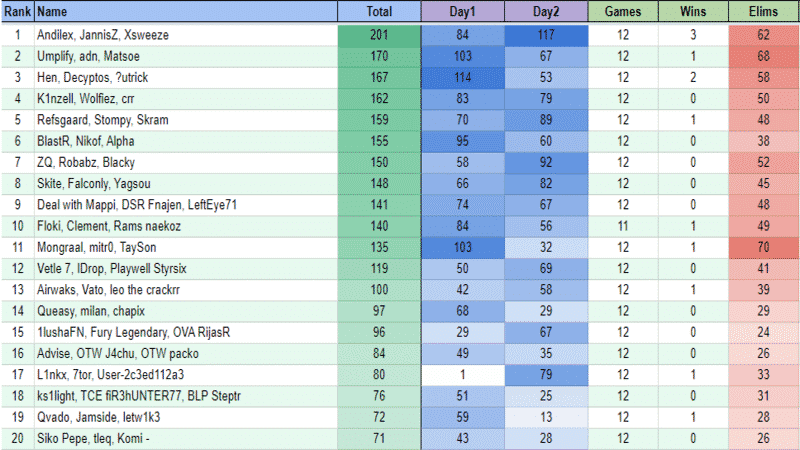 The former FNCS champions Wave JannisZ (Invitational) and MCES Andilex (C2S2) have Xsweeze on the second day with the three-time FNCS finalists reached the ranking. They finished their last six games with two Victory Royales, 40 eliminations and a total of 117 points. The two-day total of JannisZ, Andilex and Xsweeze was 201 points, which is enough for first place by a good margin. They are now two-time qualifiers who will attempt to continue that dynamic in the FNCS heats.

The trio of top players Umplify, Matsoe and Adn finished the third week with 170 points, a Victory Royale and 68 eliminations. Because of their performance, these three players qualified as one of only two teams in all three weeks for the FNCS prelims in Europe. Hen, Decyptos and Putrick took third place with 167 points. The always entertaining team of FaZe Mongraal, Liquid Mitr0 and TaySon took 11th place and qualified for the third time in a row for FNCS heats. The first and second week winners Keziix, 4zr and Nayte failed to make the grand finals for the first time. 19659004 FNCS C2 S4 trios in NA East for week 3 with statistics on their points, wins and eliminations ” width=”688″ height=”387″ /> [19659004] Another week and one more new winner in the highly competitive NA East region. This time TSM Commandment, NRG Edgey and Liquid Cented scored an impressive win despite a traffic jam on the leaderboard. Commandment and society increased the heat on the second day and collected 153 points to 83 points from the first day. Her two Victory Royales and 44 eliminations in the last six games secured her second qualification for the FNCS Heats. Some other top trios weren't far behind.

The entire Team New Age team of Reverse2k, Deyy and Mero flirted with victory after the first day of leadership. Despite failing to complete a Victory Royale, they scored 79 eliminations, far more than any other team in the final. Their persistence as a three-time qualification will no doubt help them in the second phase. Resident Doom's domain trio – NRG Zayt, TSM Saf and Liquid STRETCH – won four Victory Royales during the entire Grand Finals. They finished the race in third place with 199 points.

NAW – Little, Temple and Jay slay their way to victory 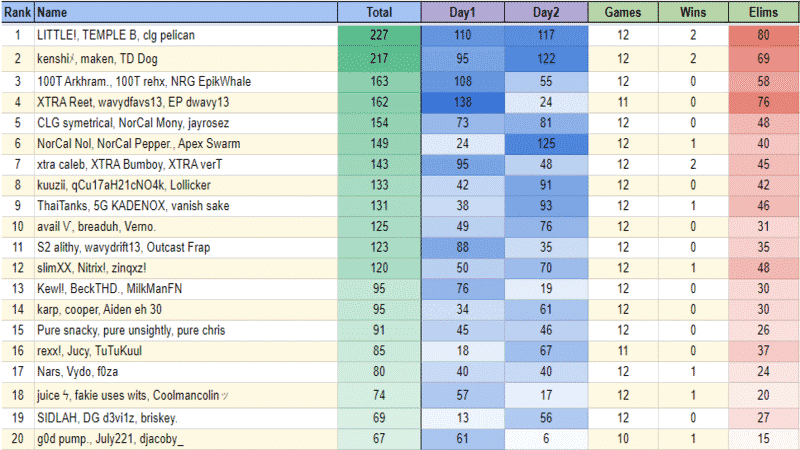 Little, Temple and CLG Jay did the seemingly impossible and defeated two-time winners Arkhram, Rehx and EpikWhale in the Grand Final. It was pretty much the performance in the last 12 games. The three NA West Champions together achieved 80 eliminations and two Victory Royales. Little, Temple and Jay also got over 100 points a day. Perhaps that victory is the hope NAW needs to overcome the onslaught of Arkhram's trio.

Kenshi, maken and TD Dog have also exceeded the 200 point threshold and finished with a total of 217. They compared the winners to two Victory Royales but fell short in the killing department. The two-time FNCS Qualifier Champs – Arkhram, Rehx and EpikWhale – ended the day with 163 points. Her dominance during this competition should make her a strong favorite heading in FNCS Heats. Hopefully some other teams will make the next two rounds interesting.

SA – Frosty, Kurtz and Redlee capitalize in the final 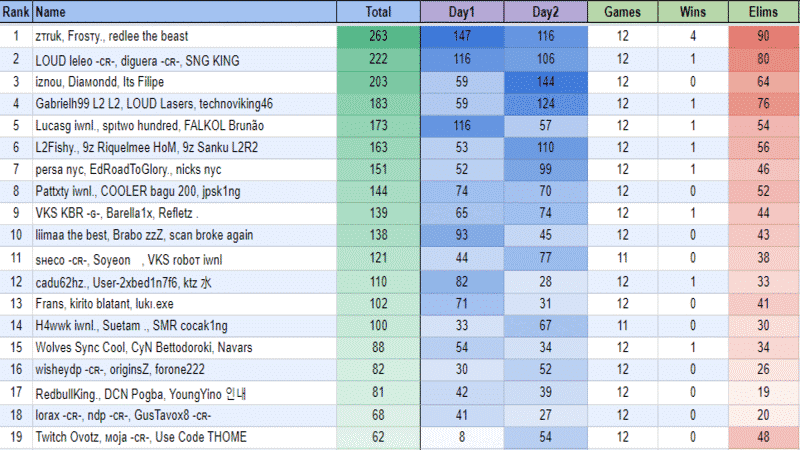 After two consecutive weeks of pure dominance by König, Seeyun and Rustyk, the three South Americans failed to make the grand finale. In their place stood FNCS Invitational Champion Frosty alongside Kurtz and Redlee, who won the week three qualifiers. They've made four Victory Royales in 12 games with a whopping 90 eliminations. All eyes will undoubtedly remain on the king and society, which for the first two weeks looked otherworldly. Frosty's team could make things interesting, however. Oceania proves to be one of the most diverse regions in terms of its talent. In contrast to many other areas, there were two different winners in the first two weeks. The third week produced one of the most dominant performances so far: IMS Basilikum, IMS Vortex and IMS Jace collected 258 points. They won three of their twelve games with 79 eliminations, outperforming all other trios in week three. Week one champions RNG Jynx, alecc and PWR finished in 11th place, while week two winners x2Twins Jesse, x2Twins Jordan and RBK volx took third place. 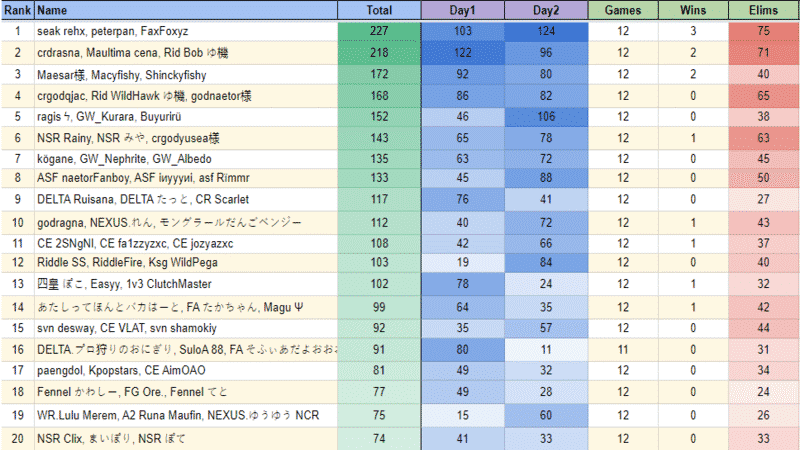 The repeat winner trend ended in the Asia region with FaxFox, PeterPan and Sseak ending in first place. These three players scored a staggering 227 points and earned over 100 each in the past two days. Their 75 eliminations and three Victory Royales led all of the finalists. Week one and two winners WildHawk, Naetor and Qjac dropped to fourth place in week three but made one more qualification for the next round. 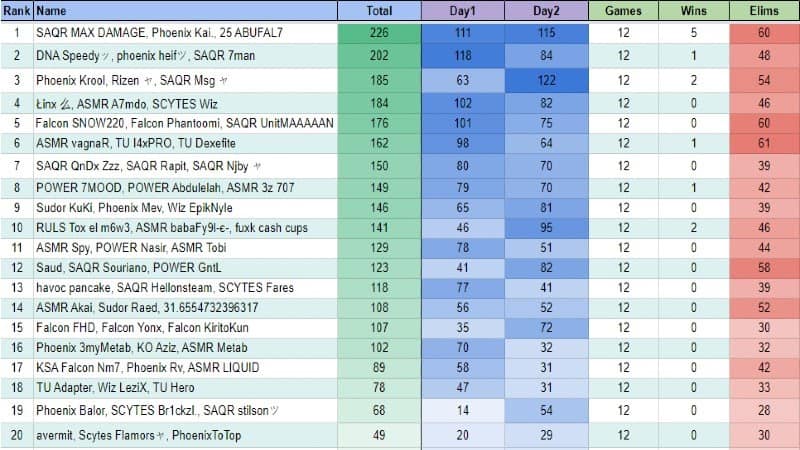 After repetition The first and second week winners, SAQR MAX DAMAGE, Phoenix Kai and 25 ABUFAL7, took first place in week three. This team improved from the 14th last week to secure second qualification for the heats. Week one and two winners KuKi, Mev and Nyle finished ninth but will no doubt be ready for the FNCS prelims. The Middle East region should be producing some action-packed games in phase two.

Mongraal Shows Off His Skills in NEW Zone Wars Mode!